THIS is how the Africa Twin started out to become a "Baja Twin". The name refers to the original Honda XR 250 Baja enduro motorcycles that Honda only seems to be willing to sell in Asia. They are sturdy looking and can be ridden all day, because they 'carry' around these special Owl-like 8"-Mother Of All Head Lights.

After my Honda Africa Twin crashed a few times (Yes! More then once) in 2011, I decided to remake the front, to resemble it like the Honda Baja XR250 - only bigger. The Baja Twin wasn't born untill I found the excellent Baja Designs head light. The single beam enlightens the darkest of dust showers during the infamous Baja 1000 rally raids. They are found on a lot of 4x4 muscle cars, KTMs and Husky bikes, and since the beginning of 2012 - also on our the good old and trustwurthy XRV (750cc, RD07, 1993).

It used to be a Honda Africa Twin


The motorbike that some people claim to be "the father of all big bore enduro bikes", was sold to me over the internet. After a brief inspection and a ride on the monsterous looking thing, I did indeed buy it in an eye wink. These sort of machines never stop to exist, stop to run, stop for anything, so it must be good. At home I found out the chain was sloppy, some of the panels were cracked, the trip meter wasn't working for long, the fuel tank was dented as well as the radiator on the left and the luggage carrier had a crack in it (all a result of someone dropping it to the left).

On top of it, the color scheme of the bike was dreadful. The idea of a paint job was born. Better said then done, so it appeared. It took me ages to get all the decals / stickers off the fairings. And spray painting the plastic and the tank on the roof top, meant that some 40% of the color landed on the roof some where in stead of on the designated area's I thought I aimed at.

Anyway, the black - metallic grey bike turned out to be a beauty. Our beauty. Our 'George' (people give their bikes names, don't they?). Ready in time to leave for a short field trip to Morocco. The country to try out a RTW trip in short, the natural habitat of the Honda XRV 750. It wasn't that we didn't reach to Northern Africa, or that we didn't like the idea of such trip, unfortunately we did not see much of Morocco's Atlas mountains, Marrakesh or any other of the King's Cities. George did not even bring us all the way to the port of Sete where our ferry was harboured (South of France).

Half-way, all the way from Amsterdam, it already suffered from electrical problems. The regulator had stopped working. A common problem of this type of bike (some say from Honda's even). Luckily a friend arrived at le route national - to the rescue. Being faint for lack of energy after all the bike-pushing we had done - I didn't realize the rear of the bike (that sat on a bike transportation trailer) was not tightened with two but only one strap. It took about 2 turns and 10 minutes later before George tumbled down and landed hard-on on French tarmac.

The bike was quickly fixed at Uncle Tom's scrap yard in the South of France. We bended the handle bar back into position and so did the footsteps as well. We spent an entire roll of duc tape to stabilize the cockpit (more or less). A Honda CBR 600F served it's purpose as a donor for the broken regulator. The next day Comarit brought us to Marocco (Nador) where we shortly found out that the fuel pump had stopped its operative duties too. Bummer!

Now it's a Custom Twin; Baja Twin is born


Back in The Netherlands we could have ditched the bike, but George had gained a place in our minds (and hearts). It must have been bad luck. The friendly bike itself is not to blame! So a small rebuild was planned. As the front was shattered, all the fairings had to go (to costly to renew anyway), as well as the dashboard, the sub frame, the handle bar, the foot pegs, the regulator, the battery, the fuel pump etc.. On top of this, a repaint was done some months ago. Not on my roof top terras this time, but in a proper garage. I can tell you that working on an Africa Twin has not become one of my passions but it does give you a lot of technical knowledge on the bike that my come in handy when on the road for a long time.

Some of the (after market) gear that has been bought and installed on the Baja Twin:
My friend David McTrusty (alias "Dusty") did some electrolytic welding on the frame of the bike.
Jeroen van de Voorn of VVM Racing (Spaarndam) helped me out with rerouting the exhaust and checking the valve clearances as well.

Thomas from Bikes & Solutions (Haarlem) fixed a problem with the carburetor that was caused by some dome-ass mechanic in Morocco. This lunatic dug into my bike and defragmented most of it right on the dirty street... He found out the fuel pump had ceased to exist but that's about all he could do for ten Euro-bucks!

Well - That's all on the Baja Twin. Now, let's ride!
- And, yes, we'll be both sitting on George. One cylinder each ain't bad! LOL 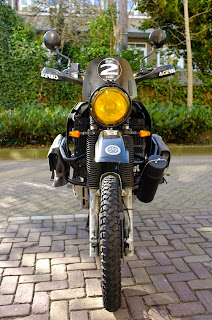 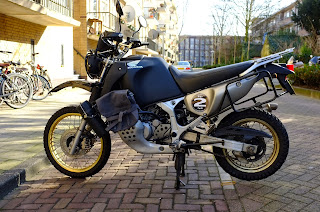