Places we visited since our departure from The Netherlands, March 14th, 2012 (updated manually when Internet availability permits, not with some sort of fancy SPOT device ;-)

Part I - Europe to Asia

After a preparation time of about a year we decided to embark upon the most classic overland route from Europe to South-East Asia. Leaving the country riding the bike gave us the 'road trip' feeling straight away and also enables you to adjust and change the bike and stuff, whilst still being able to buy parts and gear. The Silk Road adventure took us through very distinctly different countries, meeting new people and cultures every single border we crossed. One of the highlights is of course Iran, and the Islamic hospitality and also the beauty of Nepal, the different food that we enjoyed and finally arriving on our own bike at our beloved Bangkok.

In Bangkok we had time to think of the next leg of our journey. In November 2012 we decided to send our motorcycle from Malaysia to Los Angeles, from where we explored a part of the USA (leaving the rest for some other time) and crossed the border into Mexico to start our Latin America leg of the trip. Descending down South, at the beginning of 2013 did certainly not disappoint. Although the Spanish invaders left their footprint in most of the countries we visited, the natural beauty of each country is remarkably diverse, the Indian people have their own culture, cloths and food in every country. The roads in the America's are a joy to ride, more challenging (dirt and paved) than the one's in Part I.

We followed our noses - all the way down to Argentina leaving Chili and Pategonia still on our traveller's bucket list. As winter moved in, we did not expect to get to Terra del Fuego. Camping became harsher and harsher and travelling by motorcycle is not so much fun any longer in June and July. We crossed  the Atlantic embarking on a Italian freight liner, only to arrive in the 'warm' weather of our summer in Europe. By boat to Antwerp, Belgium and finally... Our home sweet home in The Netherlands.

The most important inspiration to us was the travel book written by Ted Simon, Jupiters Travels (part I and II). The old Geezer traveled around the globe twice, at the age of 43 and 69.

This is how the biggest Adventurous Motorcycle Travel agency Edelweis (yes, they're Austrian) let their customers see the world (1 year RTW trip). Something we'd rather do on our own. 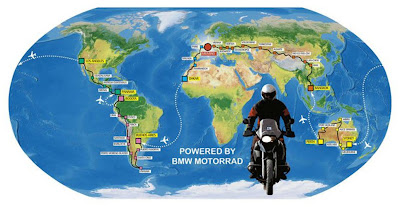